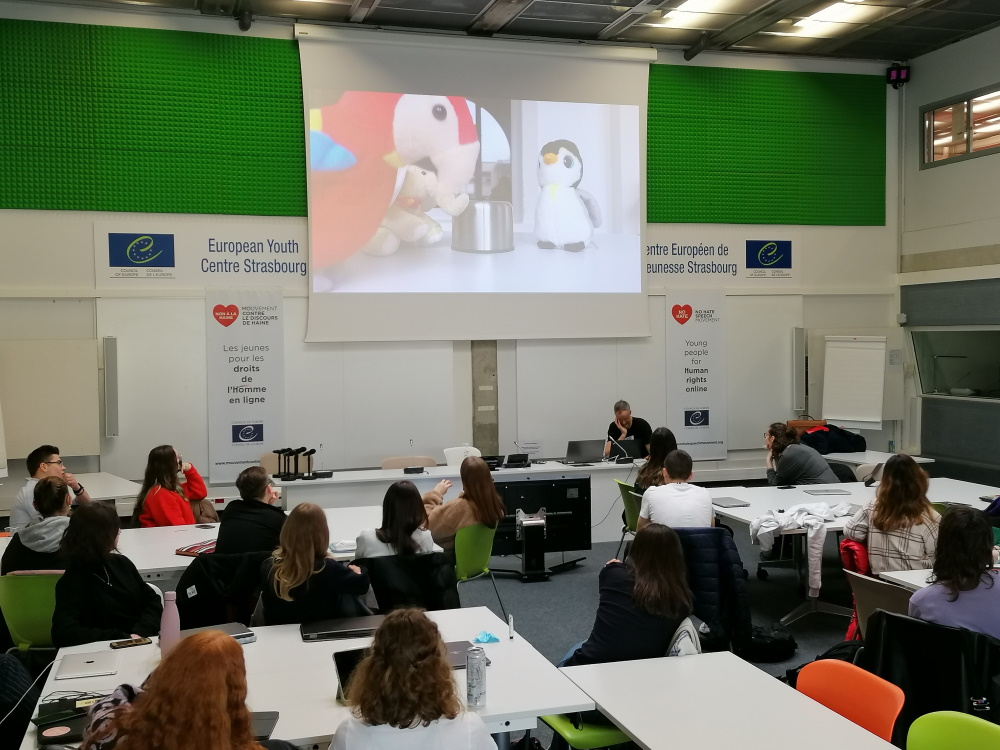 The students of a class were supposed to prepare a short presentation on their opinions about the COVID-19 pandemic and discuss their reasonings afterward. The camera focusses on Josephine. She has already begun her presentation and you see her while making her last few claims.

Josephine: In my research, I have found that you might very well say that a Covid-19 vaccination is useless. A good friend of my aunt’s cousin twice removed actually died even though she got all the recommended vaccinations. So the Covid vaccination is obviously useless.

One might even go as far as to say that vaccinations in general are utterly useless.

Who is to say if my aunt’s dear friend might not still be alive if she had not got vaccinated? I’m sure she would still be with us if only if only she had not trusted her doctors.

The vaccine was probably even harmful, since she died afterwards. So why take the risk of a vaccination? After all, many people say that Covid is nothing but a flu.

The camera focuses on the audience. Cosima looks very supportive of Josephine. Mirja looks confused, disbelieving, and a little disturbed.

Josephine: Some say the only thing that possibly helps against the pandemic is distance, but this is nonsense. What an idea to suggest that no one should ever again be in contact with anyone outside their immediate circle of friends and family! It is completely unrealistic.

I thank you all for your attention and will end my presentation here.

Mirja (loudly): What are you talking about? What she said doesn’t make any sense! She came to completely wrong conclusions and didn’t have any reliable proof to back up her claims!

Cosima: (defensively) How can you say that? Josephine is my best friend and I would believe her if she told me that pigs can fly because her dogwalker’s boyfriend says so. Whom she believes I believe! And she is one of the best students in this class, by the way. She would never draw wrong conclusions.

Mirja: Stop defending her just because she’s your friend! You should support or rather shouldn’t support the ARGUMENT and not the person!

Cosima: (defensively): She is smart and wouldn’t make any mistake concerning the logical validity of her arguments.

Mirja: How do you know she is that smart?

Cosima: Because she wouldn’t make mistakes like that. It’s as simple as that!

Josephine: Yes, it is. Why are you so mean to me? You just don’t like my presentation because we two aren’t best friends.

Mirja: This has nothing to do with it. It’s just that your claims are illogical.

Josephine: Why do you hate me?

Pause Mirja: to the camera: exhausted: I give up. Is there no logic anymore?

Josephine: A good friend of my aunt’s cousin twice removed actually died even though she got all the recommended vaccinations. So the Covid vaccination is obviously useless. One might even go as far as to say that vaccinations in general are utterly useless.

Hasty generalisation: A single death does not speak against the general medical efficacy of a vaccine or vaccines in general.

Who is to say if my aunt’s dear friend might not still be alive if she had not got vaccinated? I’m sure she would still be with us if only if only she had not trusted her doctors.

Argument ad ignorantiam: the fallacy that a proposition is true simply on the basis that it cannot be be proven false.

The vaccine was probably even harmful, since she died afterwards.

Fallacy of the single cause or Causal reasoning fallacy: many different causes of death should have been considered here

So why take the risk of a vaccination? After all, many people say that Covid is nothing but a flu.

Some say the only thing that possibly helps against the pandemic is distance, but this is nonsense. What an idea to suggest that no one should ever again be in contact with anyone outside their immediate circle of friends and family! It is completely unrealistic.

Appeal to extremes: attempting to make a reasonable argument into an absurd one, by taking the argument to the extremes

She is smart and wouldn’t make any mistake concerning the logical validity of her arguments.

She is smart because she wouldn’t make mistakes like that. It’s as simple as that!

Why do you hate me?

Loaded questions: contains the assumption that the student hates the other one

Pause Mirja: to the camera: exhausted: I give up. Is there no logic anymore?

Don’t give up. Become a critical thinker!

P: Hey, Mr Elephant, I heard you make this weird remark about climate change as if you didn’t believe it’s real. What was that about?

E: Well, I don’t really think it’s such a big deal. I have never heard of a lion or a zebra that died of climate change, so I don’t see how it should affect us elephants. There is still snow on the Kilimanjaro from time to time, so why worry about snow and ice in Antarctica?

P: Yes, indeed. My brothers and sisters are already affected by climate change and it is only a matter of time until it will destroy your habitat, too. Do you know how many penguins die every year? We must act now or it will soon be too late.

E: I’m not quite sure about this. I mean times change, seasons change, fashion changes. Why worry about climate change?

P: Because man-made climate change is not a natural phenomenon and it cannot be reversed, unlike a fashion trend that people do not fancy anymore.

E: I don’t think it’s that dramatic. I mean how hard can it be to stop man-made climate change? All we need to do is to stop flying.

E: You know what I mean. No flying around in airplanes, no carbon, no climate change. Even an elephant knows that much.

P: Yes, or single cause fallacy. Come on, you know climate change is a far more complex problem.

E: Well, all I know is that the prediction for tomorrow is that it will be warm and sunny in Africa. And the same it true for next week’s and next month’s prediction. So why worry about next year’s or next decade’s predictions?

P: True, this is an equivocation. You speak of predictions, but you are actually mixing up two completely different terms: weather and climate.

E: Not the same thing?

P: Goodness, of course not. Do I really need to remind you that it is climate that might soon wipe my entire species off the face of the earth?

P: No, it’s not, because it’s not an illicit appeal to gain your sympathy. We see biodiversity loss already. It is therefore a valid argument. Extinction is a real danger. Don’t you know anything about science?

E: Well, science or no science, rain or shine, I can’t say I really care.

P: I can’t believe you are so ignorant!

E: What are you saying?

P: You have absolutely no clue, you with your gigantic trunk and your tiny brain!

E: What does my trunk have to do with this?

P: You are such a stupid creature!

P: Listen, elephant. If you are not interested in science, then we have nothing to say to each other anymore. You better think twice. I do not want anything to do with a dumb flat-earther. Climate change actions must be our number one priority! Are you with me or against me?

P: Shush. Shut up, you silly bird, I have nearly won him over. Again: Are you with me or against me?

P: I told you to shut up, you daft bird, or I will pluck out every single feather of yours…

P1 and P2 just left class and sit down next to each other. On the table sits another girl.

P2 English class was hard. I don’t like the topic

P1 God, slavery was horrible. It is so disgusting that people really thought of black people that way.

P2 Don’t say a thing. You are just a racist believing everything is God’s will.

(Cut to a narrator: That is a fallacy. P2 is just Poisoning the Well. Do you see the problem here? Before P3 could even say something about the topic P2 already talked badly about P3. This already influenced the opinion of P1 and the audience)

P3 I am not racist and the fact that I believe in God doesn’t make me a person that just discriminates another human being because of their looks.

P1 Guys, please stop arguing. Could we please just talk about something else?

P2 Fine. Let’s plan what we want to do after school. I have only one class left.

P2 Oh, I just remembered I can’t go. I have a huge load of homework. Teachers are just the worst, they always give us extra work because they don’t like students.

(Narrator: Do all teachers dislike students? No, this is a hasty generalisation. When you say something that general and pretend it was universally true regardless of the circumstances or the individuals you commit a Dicto-Simpliciter Fallacy.)

P1 I happen to know, that your teachers give everyone in class the same amount of work even though they like a few students. My teacher likes me and I still have to do my work. It’s their job to teach us.

P3 I hate doing homework, every time I sit down and want to start, it begins to rain. And I really don’t like rain.

(Narrator: And again P3 committed a fallacy. To connect two completely independent situations that don’t have a real connection is called a Post Hoc Fallacy.)

P1 Stop, exaggerating. You know that your homework doesn’t influence the weather. What about tomorrow? Do you have time for shopping then?

P2 I still can’t go shopping. We could do something different.

P2 It’s just the COVID-restrictions. I would have to be vaccinated

P1 What? You aren’t vaccinated?

P2 No, the vaccine is deadly. My cousin died because she got the vaccine.

P1 You said your cousin died because of a stroke.

P2 Yeah, but she got the vaccine three weeks before. The vaccine is the only explanation.

(Narrator: Wrong, wrong, wrong! P2 started with a hypothesis that is not true and drew a conclusion without proper evidence. This is a false syllogism. When she claims that the vaccine must have caused the death of P2’s cousin, she ignores all other possible causes. This is a hpothesis-contrary-to-fact-fallacy.)

P1 I will text you about our plans, but I have class as well.

Narrator: Has it ever occurred to you how many logical errors we tend to make every day? Think about it. When did you notice false reasoning the last time?